Business against the virus / Gorodskoy Ritm

Central TV-channels reported: “Portable device for quick detection of coronavirus infection developed in Troitsk!” The news has circled around the social media as the epidemic manyfold increases the people’s interest to anything that brings hope to overcome the disease. Yevgeny Gorsky, Director General of Troitsk Research and Development Center (a part of the TechnoSpark Group of Companies), who received a Person of the Year 2018 award in the nomination of Innovations, told us about the features of Indicator-BIO device and the perspectives of its implementation. 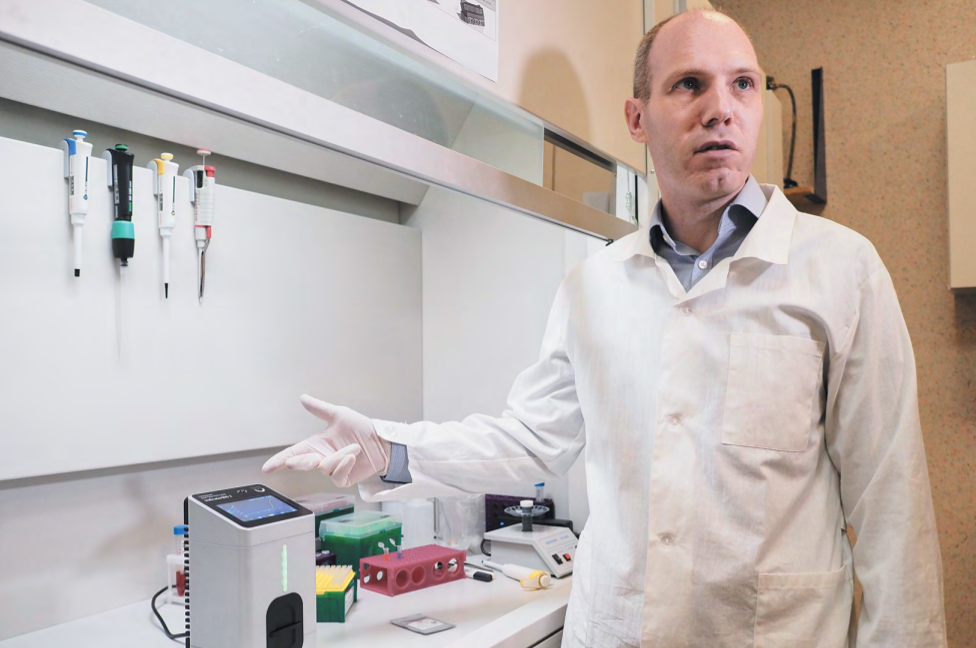 Being a half size of a coffee pot, this small device is standing on the laboratory bench. There is a pullout tray at the bottom, a touchscreen at the top, and the customer’s logo depicting letter M placed above a cup (which is the logo of Pirogov Medical University) in the corner. Yevgeny Gorsky is in a laboratory coat. He is demonstrating the device: he is opening the bag containing a single-use microfluidic cartridge, which had been manufactured right there, and, using a dropper, he is filling it first with reagent and than with test material. In real conditions it will be a nasal or throat smear. “Did you test each other for the virus?” — “No. It is not a laughing matter! We have no legal right for sampling, as we do not represent a medical institution. We are just equipment developers,” said Gorsky. Cartridge is being put inside the device and the screen is already displaying the program ready to start the testing. In a minute the temperature is increased to 96 degrees and then the device is performing a number of cooling and heating cycles necessary for polymerase chain reaction. In order to detect bacteria and viruses, the distinctive area of their genetic code is multiplied many times and colored with special pigment; then, its concentration is measured by optical methods. It takes about half an hour.

The screen is displaying curves: there are two of them, but there can be up to four: one is a control curve and all the rest reflect the detection results. The type of reagent determines what is detected. For example, it can be COVID-19 and two kinds of influenza virus. “The principle is similar to a pregnancy test. If both curves are at the zero point, the test didn’t work. If only the green curve is there, there are no pathogens detected. But if both curves are increased…Now we can observe a successful test with negative result,” explained Gorsky.

PCR method is widely used; however, typical analyzers are large and slow-speed devices designed for doing a hundred of tests at a time. They only can be applied in laboratories. The Indicator-BIO performs only one test, but the test is quick and on-the-spot. For example, the device can be used in airports, ouptatient hospital departments, customs offices, etc. In other words, it is designed for any place where there is a necessity to quickly test one person. Such portative device has no counterparts. The cost of analysis using the Indicator-BIO will be about 300 rubles, while with the American device Cepheid GeneXpert II the cost may be a several thousand rubles.

Six Indicator-BIO devices were manufactured in Troitsk Research and Development Center so far. One of them is now in front of us; all the rest are being tested together with the testing systems. Test certification is now accelerated to the maximum. It takes five days instead of a year! Six systems detecting coronavirus have already been certified in Russia. 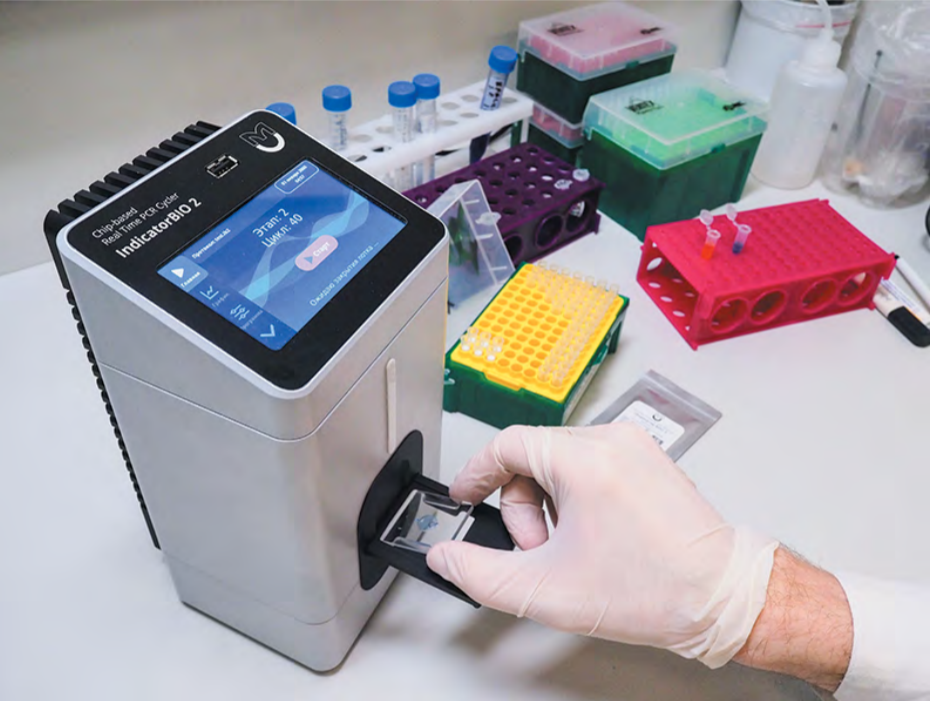 At the intersection of disciplines

“Now I will take off the laboratory coat and turn into the Director,” said Yevgeny Gorsky. We are entering his office. He is a physicist by training. His career has started and continues at the Institute of Spectroscopy of the Russian Academy of Sciences (ISAN) and now it is associated with innovations. In 2013, Gorsky became a head of Troitsk Research and Development Center, a spin-off of RnD-ISAN, for implementation of such ISAN’s developments as light sources, spectrometers and optical detectors. The same year TechnoSpark was opened and Troitsk Research and Development Center became its resident. In 2016 the center established cooperation with N. F. Gamaleya Federal Research Center for Epidemiology & Microbiology and Pirogov Medical University. “Biological analytics became an area of our activity after we received the order for contract-based developments. The reason why we were assigned to this work is our readiness to undertake any challenging projects. The most difficult part of them is multidisciplinarity. Communication between biologists and engineers often requires an intermediary. We are lucky to have physicists among our partners, who eventually became biologists. They went deep into the matter and facilitated the communication,” said Gorsky.

The development of Indicator-BIO started in the end of the year 2018. It was commissioned by Pirogov Medical University within the framework of the Federal Grant Program of establishing National Chemical and Biological Safety System. The project was at the finishing stage with the prospective of batch production launch in the end of 2020. However, with the first news from China concerning the virus, it has become obvious that now is the time when the device is most needed.

One year in two months

“We should understand that the device cannot be massively produced right at the moment. The devices within a batch of five and of a thousand items may look the same, but they will be drastically different inside. Normally, it takes a year to prepare design documentation. Now we plan to launch serial production in July. We consider the earlier terms, but it will depend on the component supplies. Sometimes they ask us why it takes so long, but two month for device engineering is an incredibly short term!” explained Gorsky.

Other TechnoSpark companies participate in the production. TEN Optics is working on the substitution for foreign-made optical components; TEN fab manufactures mechanical parts and BioSpark provides consultations as to biological matters. The device will be assembled at TechnoSpark. Planned production volume is from 50 to 100 devices per month.

When journalists knew about the development, Troitsk Research and Development Center became famous around the country. “I am not sure whether it is a good or bad thing. We work as usual, as television won’t make the devices instead of us,” said Gorsky with a smile. But still is there a feeling that Troitsk engineers are saving the humanity right here, in the laboratory silence? “We just work to our best. If we do, it will be good,” said Yevgeny calmly.