Individual 3D printed fusion cages produced by the contract manufacturer of additive endoprostheses TEN MedPrint (part of the TechnoSpark Group of Companies of the Fund for Infrastructure and Educational Programs investment network of RUSNANO Group) under the order of Pozvonoq Company have been installed at major Russian spine surgery clinics. TEN MedPrint company is ready to produce up to four thousand intervertebral fusion cages in 2020.

3D printed fusion cages have become an alternative to static spine stabilization technologies, jointing the lumbar vertebrae (OLIF, ALIF, TLIF) for severe degenerative disc disease treatment. Additive endoprostheses are broadly used for reconstruction of bones and joints after heavy traumas and oncological disorders. In Russia, this is the first additive technology applied for intervertebral fusion cage production: traditionally, cast structures of a fixed range of sizes have been used. In the USA, Great Britain, and Germany, since 2017 till the beginning of 2020 over 20 thousand additive fusion cage installation surgeries have been done.

Today, in Russia around ten thousand surgeries are carried out every year, involving imported intervertebral fusion cages produced mainly with the traditional methods. Pozvonoq company claims to be ready to substitute up to a half of this demand with its products. “In the year 2021, 450 typical sizes of our batch products will be supplied to the market to be accessible for any clinic. The presented product line covers the entire range of devices for vertebral fusion and various surgical implantation techniques,” said Olga Voblaya, Pozvonoq Company Director. 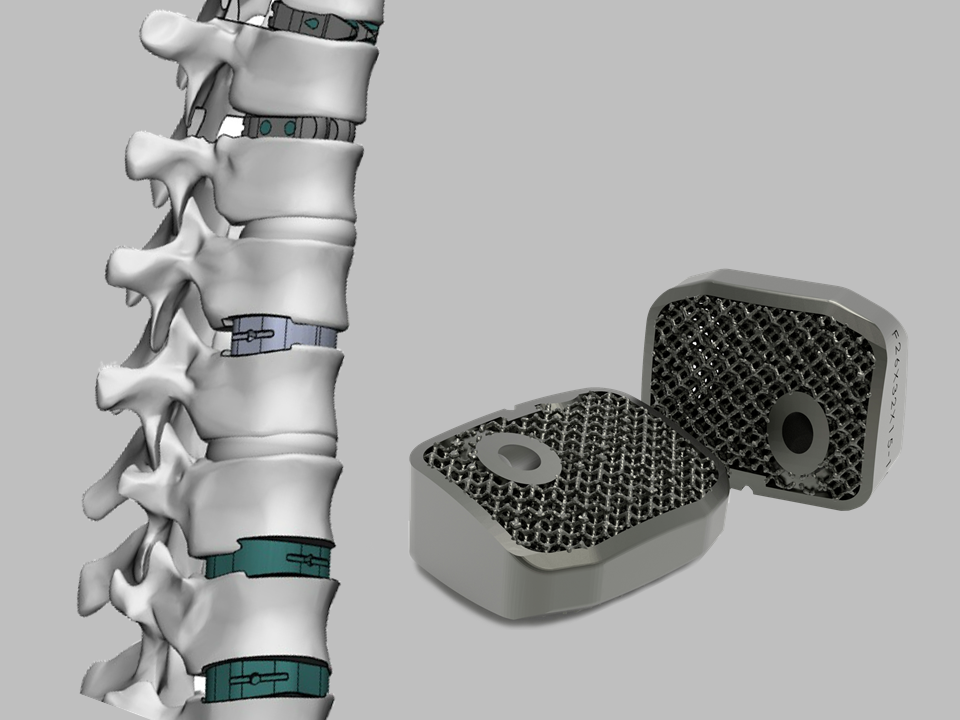 The first surgeries with Russian additive fusion cages were carried out in the late 2019 – early 2020 with good results. Postoperative supervision is still going on. Among the first to use the additive fusion cages produced in Russia were specialists of the Russian Scientific Research Institute of Traumatology and Orthopedics named after R.R. Vreden (RSRI of TO) in St. Petersburg.

This technology is a modern and promising Russian project. Even now it shows great performance, making it possible to adjust the implants to each patient’s anatomy to achieve the desired orthopedic and clinical result at the minimum number of fixed segments. The device has earned a great reputation in the treatment of a large range of vertebral disorders, from traumas and degenerative diseases to vertebral tumors. Further material porosity and plasticity adjustment studies will improve the implant survival rate and reduce the frequency of pseudoarthrosis.”

The Pozvonoq fusion cage beats its competitors due to the outstanding geometry that facilitates the anterior approach installation even on patients with the BMI over 36. The size mix also includes some hyperlordotic cages for correction of degenerative deformations from the anterior approach, which is an innovative universal trend. For patients with spine peculiarities, individually customized cages can be designed. The promptness of cage supply is worth noticing. The production is carried out in Russia, which makes the cages less dependant on the exchange rate fluctuations. The designed implants are capable of competing with the foreign and Russian analogues not only in their quality but also in the prices that are lower than those offered by the majority of famous manufacturers.

A need for additive technologies in surgery is also remarked by the specialists of the Russian Ilizarov Scientific Center for Restorative Traumatology and Orthopaedics (RISC RTO), running major research of the efficiency and safety of using 3D printed interbody implants for stabilization of vertebra and sacroiliac joints, as well as major bone defect replacement.

The main additive fusion cage advantage is the simplicity of its production and applicability with respect to different pathologies, individual anatomy and bone tissue parameters of every patient. Essentially important production aspects should be a well-developed pre-operation planning protocol and a short cycle of production from the 3D digital model to the finished individual product. Among the medical advantages, it is worth mentioning the high quality, safety and expected biocompatibility. Moreover, the low cost of the product determines its big marketing future. Hopefully, the technology that has proven its efficiency will be wider used in our country.

Pozvonoq startup launched by the North-West Technology Transfer Center and Orthoinvest Russian Production Company specializing in power equipment, trauma treatment and orthopedic implant production, is planning to start mass production of 3D printed fusion cages in 2020. Engineering is done by CML AT Medical Company, and 3D printing will be carried out by TEN MedPrint from TEN Group of the TechnoSpark Group of Companies. The product distributor is Altermedica Company, one of the leaders in implant and endoprostheses distribution in Russia.