Making cities a “smart” and comfortable urban environment does not only entail turning to various kinds of innovations and technological know-hows but also applying the so-called clean or green energy.

Apparently, the most popular and at the same time most promising source of such energy is solar power. The International Energy Agency claims that by the year 2050 up to 25% of power will be generated by solar power plants.

Many experts are certain that despite Russia’s wealth of fossil fuels, the future lies with renewable sources of energy, including solar power, that may as well dominate the energy source landscape. As technologies develop, the production cost of such energy is not only to drop but to generate super profits.

The global scale of solar panel production has been doubling every 3 years, which further cuts production costs and leads to lower prices. While merely 15-20 years ago solar panels seemed to be something unimaginable, their installation on rooftops today has already become commonplace.

Technologies that are now actively applied in solar panel production have been specifically designed for enormous solar power plants to be built in open spaces and not in cities. It means that prices for electricity include service fees imposed by grid electricity suppliers and ground rent paid by power stations. Enthusiasts who are taking solar power to their homes are faced with a number of obstacles. Traditional solar panels made of crystalline silicon imply some restrictions. Particularly, they are heavy and rather brittle. Therefore, they will not comply with all types of roofs. Roofing materials and roof configuration are important factors. The installation process itself is not particularly easy and cheap either. It requires a special frame to be designed and put in place so there is something to attach solar panels to later. The support construction is often twice as heavy as a panel itself, as it weighs up to 25 kg/m2. However even if the building can bear such loads, the bulky construction will hardly look pretty, and chances are it will not blend in with the look of a modern-day town.

There is another important pitfall that is rarely talked about. The thing is that the composition of a traditional solar panel is 90% glass, aluminium, and silicon, which are all highly energy-consuming materials that leave a tremendous carbon footprint in their production. There is no denying that there is a bit of dissonance in the fact that the production of solar panels meant to be “green” actually ends up polluting the atmosphere. These pitfalls explain why traditional silicon solar panels have not become a hit in the urban environment.

There are technologies, though, that can enable us to harness the limitless solar resources in cities and make it popular and affordable. Flexible solar panels are one of such solutions. Thin, lightweight, and barely noticeable, they boast enviable efficiency. Unlike traditional panels, their flexible counterparts involve the technology of thin-film photovoltaics, where crystal silicon is no longer used as the active layer replaced with microcrystalline or amorphous materials that are attached to a flexible substrate. Such panels can be installed on almost any kind of roofs and facades – they are easy to mount and their weight per square meter does not exceed three kilos together with all fixtures. These flexible solar modules are about 2 mm thick, which means they will have a minimum impact on the architectural outlook of buildings and can easily blend in with a panorama of any city.

Besides, they can even be integrated into roofing materials. To top it off, such panels are more effective in cloudy weather and in partly shadowed conditions. Nice and thin, flexible modules can be attached to walls with lower bearing capacities, for instance, heat-insulating sandwich panels. Vertical installation is even preferable in some of the regions. For example, in Yakutia. This region enjoys a lot of sun but the sun angle is very low, and in winter the sunlight is reflective (it bounces off the snow). Moreover, installed vertically, solar panels will not require cleaning of snow.

In addition, polymer films that are used in production of such panels are made from petrochemicals and gas products, i.e. carbon contained in polymer gets “bound” and therefore is not emitted into the atmosphere. It implies that to make such a product will not only entail lower carbon footprint but it can even be deemed negative.

The new technology of making flexible solar panels makes the production of solar power really affordable. It gives a chance to private households to not only cover their electricity demand but share the surplus with the grid network. In the urban setting, such flexible solar panels can blend in perfectly with the concept of a comfortable city environment. They can be used, say, in municipal engineering. Solar energy can power air conditioning, for instance.

“Energy saving and reducing the environmental load aren’t the only reasons that advocate for solar panels, they will also improve the overall energy rating of buildings and add to their high-tech performance,” explains Andrey Khomenko, Director of Design Bureau 1642. “The investment pays off in terms of introducing the best available technologies in the market. The economic effect may be even more tangible when the panels are installed as part of the facade refurbishment. Here we kill two birds with one stone – heating the building and saving electricity – which will cumulatively recoup the repair costs and, eventually, energy expenses.”

City parks, green areas, playgrounds, various locations, and their elements, can be converted into solar power as well, specialists claim.

Further development of flexible solar module production technologies can significantly expand their scope of application. Installation of such panels should not be restricted to facades or rooftops. Now the “roof” can be portable enough to be taken on a hike – just roll it up! It resolves the problem of electric power supply at campsites – there is no more need for hefty fuel supplies. Flexible solar panels themselves can serve as tents or sun blinds. The “solar blanket” can be used at landfills, too, which will protect them from the wind and precipitation (and therefore stop the waste and odours from spreading around), and produce electric energy, while confining the landfill gas. 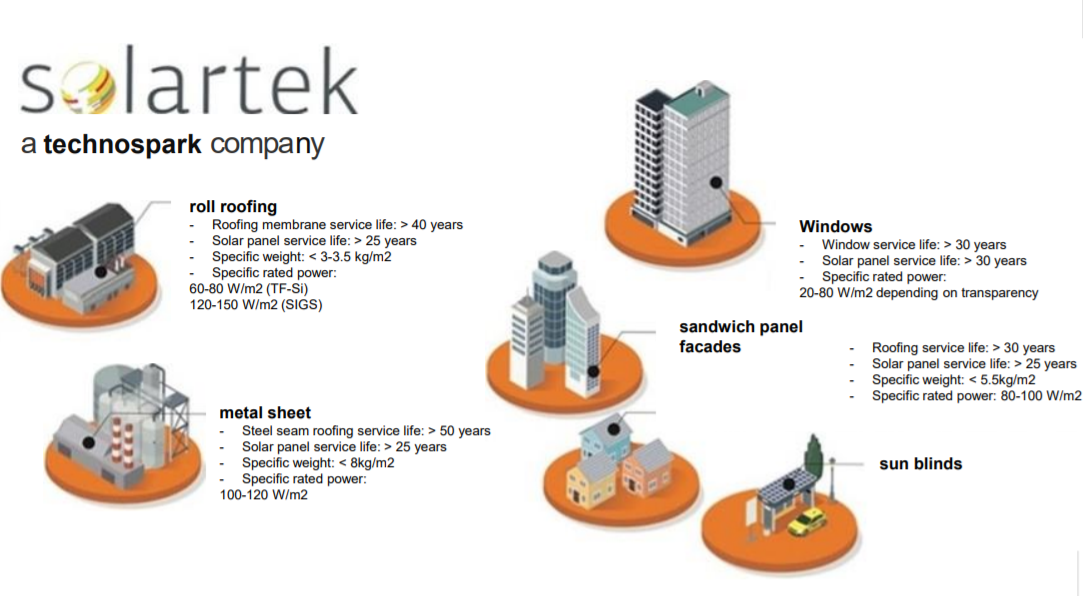 The Russian Solartek company that is part of the TechnoSpark Group of Companies from the RUSNANO Fund for Infrastructure and Educational Programs, specializes in development and localization of the best technologies that exist today in the area of flexible thin-film solar panels, including solar roofing solutions, like flexible shingles, soft roofing materials, facing tiles with embedded thin-film photovoltaic panels. In the next 12 months, Solartek in partnership with the Nanotechnology and Nanomaterials Center of the Republic of Mordovia is to launch the first factory in Russia (Saransk) that will be producing flexible solar panels under the brand of SteelSun. SteelSun factory will produce solar cells and modules using the Copper Indium Gallium Di-Selenide (CIGS) technology. The average efficiency of such modules is about 15%. They will be able to function under diffused lighting and partial shading. It is to be the first Russian producer to use non-silicon based photovoltaics.

“We expect a long-term demand for integrated solar roofing systems from the commercial sector: businesses need additional electric energy during the daytime when the rates are higher,” says Dmitry Krakhin, CEO of Solartek Group of Companies. “We have already developed solutions for integration of thin-film solar panels into most widespread roofing systems in Russia, that are soft roofing, steel seam, and flexible shingles.”

As technologies, like those that Solartek localizes in Russia, keep evolving, it will inspire further development of green energy production, and thus reduce dependence on fossil fuels that is no longer in a remote future but in a more tangible tomorrow.