Have you ever heard about the concept of the word of the year? It is selected by the University of Oxford. The year 2010 brought us “vuvuzela”, in 2013 it was “selfie,” and 2017 was marked by “fake news”. Despite having competitors, 2020 will probably remain the year of “COVID”. Though, it will have to compete with such hits as “new normal”. While some people think the epidemic is going to be over soon, and life will return back to normal, others are setting new rules in the changed world. The TechnoSpark Group of Companies belongs to the latter group.

TechnoSpark started to think about how to work in the conditions of the pandemic as early as March 10, when the Russian Flexible Electronics Centre was opening. The Epidemiological Safety Office, headed by Alexander Zhuravlev, the TechnoSpark Deputy CEO, was formed on March 14. There had been no experience of colleagues by that time neither accurate knowledge about the virus spread rate and its level of severity. “On the one hand, we took all measures not to suspend the production, on the other – to save human resources,” Alexander said. “Because any machine is useless without a man.” Just closing the doors for two months and releasing staff for self-isolation at home was not an option. “To launch production after a pause is almost the same as to build it from scratch,” Alexander Zhuravlev explained. “For example, putting the cleanroom in the Flexible Electronics Centre back into operation is comparable in cost to creating a new one.” 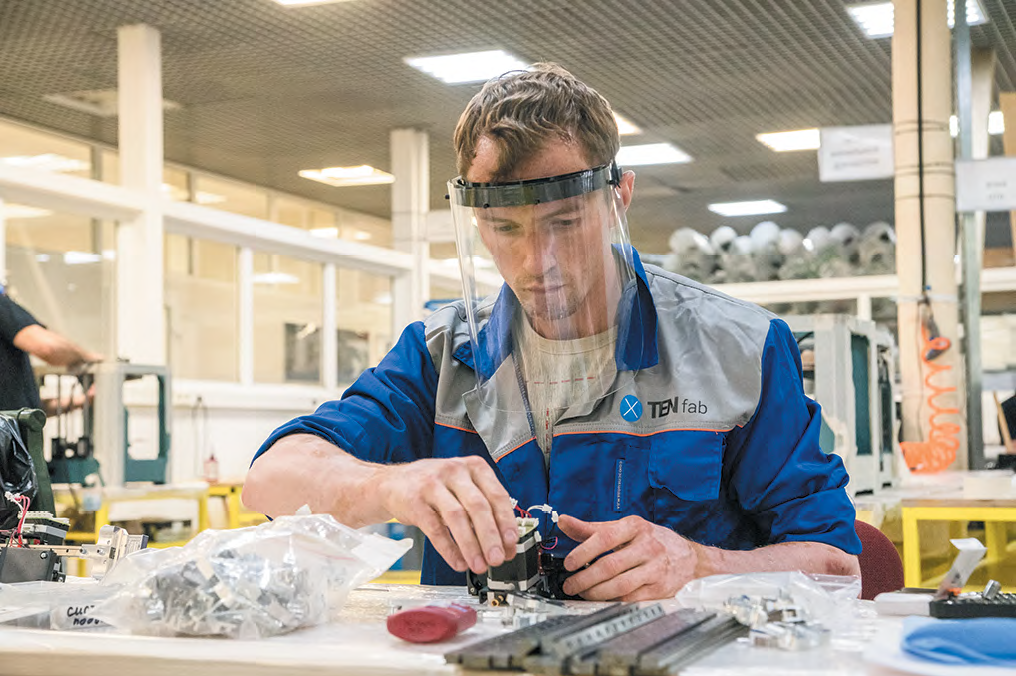 Four months later. On July 8, the “new normal” applied to high-tech production was shown during a press tour around a TechnoSpark’s contract manufacturing.

An employee in a protective suit meets us at the reception desk and asks us to look at the video camera. Face control? No, it’s a temperature measurement. We get gloves and face masks, and see a sanitizer at the entrance and a rug with a disinfectant solution on the floor. Inside, everything seems to be the same: the machines are buzzing, people are busy with them. Except, everybody is staying separately, with their faces covered with plastic shields and masks, many employees have gloves on their hands.

“Nothing has changed outwardly,” Alexander Zhuravlev confirms. “Only the contents. We limited the movement between the buildings, allocated zones inside them, set up partitions… Since the beginning of the epidemic, we have followed recommendations of doctors, considering their views on the virus, and have monitored measures applied by various structures. For example, there was a video on YouTube about a large retail store in the United States.

“TechnoSpark hass started to test employees for COVID. Every two days was a frequency of testing at the peak of the disease. Now, it is at least once a week. “Several dozen people showed positive test results at the origin,” Alexander Zhuravlev looked back. “And another leap was observed on the May holidays.” If an employee showed fever, weakness, and other symptoms at work, he or she was taken home by a specially equipped minibus; the workspaces were disinfected, other staff was controlled. “Experience has shown that if you monitor contacts on time, primarily focusing on the social distance and security protocols, then there will be no further spread,” Alexander emphasized.

Not at One’s Fingertips

In the Beta building, the excursion was continued by Oleg Lysak, the CEO of TEN fab contract company. This company fulfills the orders of other contractors, from a piece and small-series part production to turnkey solutions. Nowadays, they make Hercules 3D printers and Ronavi warehouse robots. “We are working on the orders of 20 customers at the same time. The product range is from optical system elements to medical devices,” Oleg Lysak comments. “Every day, 70 to 90 shift tasks are issued for various production stages.”

“Surprisingly, the situation with COVID made it possible to reorganize all the processes that we were going to change for a long time,” Oleg noted. The remote work regime allowed us not only to free up some work stations and ensure the distance between those who remained but also to attract some employees from other cities. We can also speak about more indirect benefits. It appeared to be that personal communication is more likely to take up time rather than to simplify a job. “Everyone substitutes the notions of communication and chatter,” the CEO of TEN fab believed. “The fewer opportunities to meet and talk caused a better formulation of thoughts. Now we specify the tasks in more detail. What we had at our fingertips, turned into an understandable process. Consequently, we got face-to-face contact reduction.”

When the CEO Is Wearing a Face Mask

TEN fab has two manufacturing areas on the ground floor, an assembly room on the second floor, and separately located software and process engineers. This totals to about 70 employees per shift. Everything possible to split has been split. If previously all employees arrived precisely at eight, now the start of the shift is time-separated, which excluded any queues at the entrance. Each workshop has its own locker room, where a quartz lamp is on by a timer. Each of them is equipped by an independent cooler, smoking room, and air recirculators are everywhere. Components shouldn’t be brought to each other, but they are needed to be left on the rack. Every item from outside is to be disinfected with a spray that is safe for plastic and electronics.

How to make everyone wear face masks and gloves in the workshop? “The answer is to demonstrate through personal example,” Oleg Lysak said. “Other people began to wear masks after I had shown them myself wearing it.” Besides, the measures are not dogmatic. Some of the machines are not possible to operate when in gloves; some of the assembly work can not be done alone. All this was being discussed and adjusted. 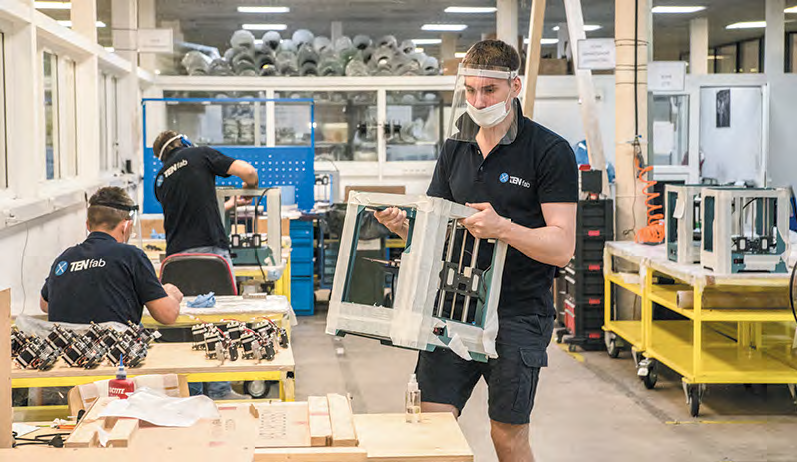 From now on and forever?

Now, about the results. Not a single COVID-19 severe case reported for the four months. About 15 new employees have been hired (about a third of them are from Troitsk), and there are still vacancies. The share of TEN fab in cooperative products has increased, and new orders on a turnkey basis have appeared. Anisoprint, another manufacturer of 3D printers, that used to assemble their products in Germany, decided to change to TechnoSpark. The Germans have shut down the production, the borders have been closed, and Troitsk manufacture has not been idle even for a day. The components are already being made in the mechanical workshop. The product assembly will start in a week and a half. Today, when the tight anti-virus restrictions have already been canceled in the world around us, on 2a Industrial Street, nothing has changed. Moreover, TechnoSpark decided to extend the anti-coronavirus epidemiological safety regime until at least the end of the year. And it does not look like anyone objects there.