In April 2021, Ronavi Robotics and RMS (both are parts of the TechnoSpark Group of Companies in the investment network of the RUSNANO Group’s Fund for Infrastructure and Educational Programs under the authority of VEB.RF) successfully completed the first stage of the pilot project for the robotic automation of the Faberlic central warehouse.

In the central Faberlic warehouse, Ronavi Robotics and RMS created a demonstration site where pallets, loaded with goods, were handled from the acceptance point to the storage place, and from the high-rise storage racks to the shipping area. The automatic loader took the pallets from the truck and placed them on robots. Acceptance of the goods was followed by a swarm of Ronavi H1500 robots transporting pallets to the high-shelf storage area while a forklift was lifting the pallets and setting them to the necessary level of the rack. The RMS artificial intelligence was ensuring robot collaboration. 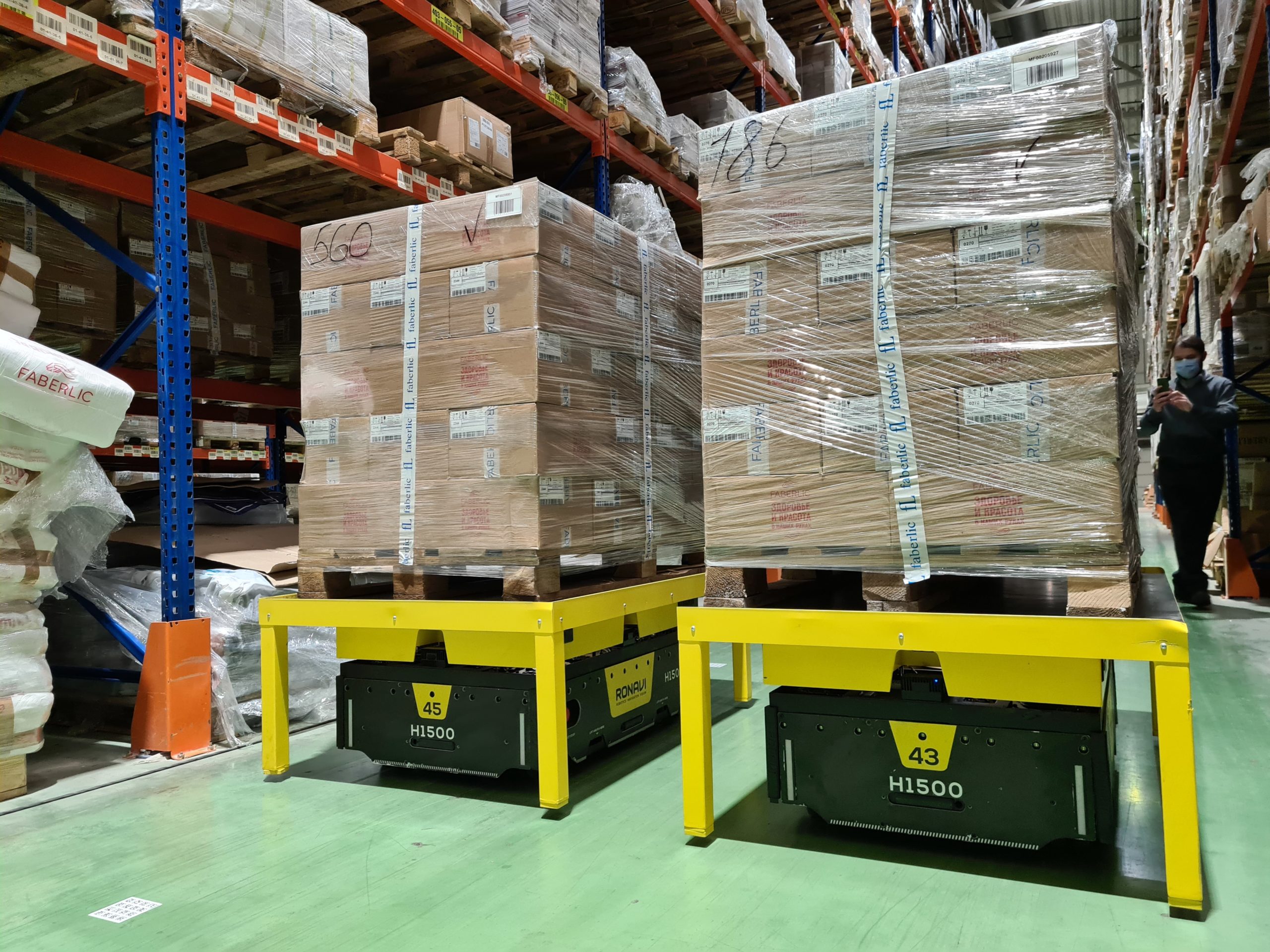 The main business goal of the worked-out scenario was to minimize the horizontal movements of the forklift. For a twelve-hour shift, each robot runs more than 40 km, and forklifts perform mainly vertical cargo movements. As a result, it is possible to increase the forklift efficiency by four times.

We consider the first stage of the pilot project successful. Logistic robots and software operated quickly, smoothly and, what is important, safely. We agreed to scale the project and go on experimenting with the number of robots and routes to be increased.

The project with Faberlic is evidence to suggest that large companies consider the real effect of robotization and are ready to get it started right now. With Russian robots and the Russian integration system, companies have got an opportunity to realize an idea of ​a warehouse of the future.

Faberlic is one of the largest Russian manufacturers of cosmetics. According to the Women’s Wear Daily magazine, it has been among the TOP-100 of the world’s largest perfume and cosmetics companies for more than 17 years. In 2020, Faberlic was ranked 31st in Direct Selling News Global 100, the world ranking of direct-selling companies.

Ronavi Robotics (part of the TechnoSpark Group of Companies) is the first Russian company to develop, manufacture and sell robots for self-sufficient operations in warehouses. Batch manufacturing of the H1500 robot was launched at two industrial sites, in Troitsk (Moscow) and Eindhoven (Netherlands), using facilities of VDL ETG, one of the largest European engineering companies.

RMS (part of the TechnoSpark Group of Companies) develops software based on artificial intelligence technology to control a fleet of warehouse robots and simulation models to calculate the cost efficiency of warehouse robots application. RMS facilitated the integration of Ronavi logistic robots in the SAP ERP management system.